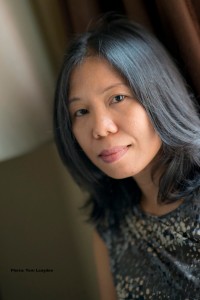 : The Untold Story of the Witches of Oz. This is a duet between Elphaba (The Wicked Witch of the West) and Glinda (The Good Witch of the North).

I have neither read the book by Winnie Holzman nor Gregory Maquire’s novel Wicked: The Life and Times of the Wicked Witch of the West (1995) that inspired the production of this musical. I have watched this musical though last Sunday, February 23, at the Main Theater of the Cultural Center of the Philippines with its Australian and New Zealander performers. As expected, I was entertained and reminded once again that as an artist, it is your devotion to your craft that makes it special. Devotion being the time and energy and attention spent in perfecting details that in the end, like a jigsaw puzzle, everything will fit together in an organic and fluid manner. Thus, its beauty and power – joy, especially to its intended reader and/or viewer.

It was a smooth, fast-paced production. The lights and music, the production design, the costume, and the actors in their magnificent character portrayals and singing were enchanting. The Emerald City glowed; the stage smoked, blinked, roared.

No wonder Filipinos love this musical; those who can afford it, of course. As for me, it was a free Parterre box ticket, the area reserved for the President of the Philippines and his company, that according to the artist community, he has not occupied since. Well, I am a taxpayer; not bothered at all receiving complimentary ticket. I patronize local productions and pay for it.

You can google the synopsis and other details about the musical. There are countless reviews on it online too. So let me talk instead about the pleasure of watching musical. My own pleasure, of course: I can only be subjective and testimonial here. But we know music, in general, alters our mood. That is an established fact. Neuroscience has explained this already. One good book I enjoyed is Daniel Levitin’s This is Your Brain On Music: The Science of Human Obsession (2006).

I love musical because it gives me a certain ‘high.’ You know what I mean, the activation of one or two of our happiness hormones. At one point, if not often, I’m sure you experience this too: from running a marathon, playing sports, climbing a mountain, smelling your favorite perfume or food, shopping designer clothes, having mind-blowing sex either with your loved one or a stranger – the list goes on. Sitting there from Act 1 to Act 2, my mind and body relaxed: I was soothed. This WICKED, a testament of imagination, talent, and hard work: I rose from my procrastination blamed to mercury regtrograde. I felt alive from revulsion when Doctor Dillamond, a Goat and the only Animal Professor in Shiz University (the school of wizardy) lose his power of speech and was thrown out into obsolence. My though balloons were the Cyber Crime Law, the 1986 EDSA Revolution Anniversary, the revolution in Ukraine, the ever-growing commercialization of the Philippine education especially in the tertiary level, Harry Potter, Lord of the Rings, Game of Thrones, Hinilawod, the enduring theme of West-North conflict, the subversive and transcendental elements in this musical, the competitive Filipino talents: that night in May 2012 when I watched Phantom of the Opera in New York City, and the next day, an off-Broadway play I now can’t recall
I got bored and kept thinking of how good – better even – our actors are in the Repertory Philippines and Tanghalang Pilipino.

This is my kind of “high:” the moment of being in a bubble courtesy of the power of reference. I was watching WICKED onstage and in my mind, the classics, the masterpieces, the best in our popular literature and culture, in the contemporary. No work of art exists in a vacuum.

Thus, I came out of CCP with a renewed sense in our task to produce during this time when it is easier to just consume. Similar to the theme of “For Good,” to produce the best, we need to consume the best. I’m glad we got WICKED.