Vernacular Excellence and Intimacies in Sibod

What comes first, music or dance? What sustains a couple in dancing together? What, of play, as structures? What of this sibod, “an experience of flow, which translates as tayuyon among the Panay Bukidnon, a state of having achieved mastery in different levels of structural and creative interplay”, therefore simultaneously noun, adjective, and most especially verb, that could help explain our modern-day dis-eases as individuals and group of people, and could very well offer both symbolic and practical solutions? Maria Christine Muyco, an Ilongga music composer and ethnomusicologist at the University of the Philippines-Diliman, offers us a framework for understanding the performing arts of Panay Bukidnon, our community of epic chanters and storytellers, musicians and dancers of binanog (hawk-eagle dance), embroiderers, and farmers in the highlands of Panay in the Western Visayas region of the country. In the words of Professor Elena Rivera Mirano, also of UP-Diliman, this book “provides us with a magic key to enter a remarkable world where music, dance, and gesture are woven together to create a fabric of human meaning.”

And what possible human meaning could we derive from this book? We come to know that for the Panay Bukidnon, life is a dance. As such, it is play—spontaneous, flowing, fun— a celebration, because “gasibod dai-a!” (The sibod is working). In the Preface, we read Muyco not only as researcher-scholar but as storyteller. She frames to us the narrative flow and design of the book by grounding us to that moment of sibod, source of what she describes as “the ecstatic energy among the crowd, as well as the musicians and dancers” that characterize the patawili, “a tradition of helping out in farm work alternated with dancing and playing musical instruments” that she had witnessed during one of her field works. That moment served as her “bolts of melody” in the mind’s eye to focus her scholarship in sibod. She invites us to see that dance, too; to listen to the music; feel the energy, be one in the merry-making. If you are one who is familiar with the Panay Visayans Ati-Atihan, Binirayan, Dinagyang, and many other communal festivities we share with folk communities all over the world, the first person narration is a seduction for both a visceral and cerebral read.

I liked it that the first-person narration, sparse and void of hubris, also saves itself from sentimentality and romanticism. Here, there is no search for “the glorious past” or for an “authentic” culture. What it achieves is the demystification of a scholar as impartial, and the balance of the theoretical tone and scholarly nature of the book with the charm of good storytelling rooted in the personal. 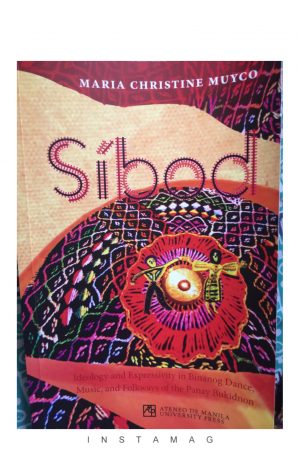 Here, what is personal is actually communal. At its best, the book advances sibod as body of concepts that functions as pragmatic praxis. We are (re) introduced to a domestic image and symbol like the banog (hawk-eagle) idealized in binanog dance becoming the language of domestic intimacies: of a blossoming love story, an extra-marital affair, an estrangement and broken heart.

The quality of the music and performance of the dance are markers of attention: say, what ails one, or the other, to be out of tune or balance? What would be the point of accord? One aims for tayuyon, a directed sense of flow. A mindfulness of this, much more a mastery, could (re)generate real actions, and ones that are in sync with the physical environment, local context, and in harmony with its people and other concerned actors.

The book has eight chapters: Encountering Sibod, The Idealogue: Panay Bukidnons, Understanding Sibod and Its Expressions, The Foundational Sunù, Hampang as Play on Structures, Catch and Sync, Tayuyon: A Directed Sense of Flow, and Sibod as a Pragmatic Praxis. It has seven appendices that are equally informative and interesting. Consider these: Language Guide, Research Participants, Pinanyo (the last phase of the binanog dance where a woman tries to capture the man’s handkerchief while he keeps on evading), Sangkap (Costume and Accessories), Bird Dance Typology in the Binanog, Dance Notation (Benesh) by Marie Yvonne Torres, and Rhythmic Modes. The Notes is a significant reference for future researchers and scholars while the Glossary contributes to our language preservation, particularly, cultural vocabulary.

The conclusion is open-ended. Muyco admits her limitations being someone not permanently rooted in the culture, and is gracious to acknowledge the community and its key storytellers as co-authors. She writes: “Their perspectives and mine are interwoven sugid that perhaps would usher in a new set of meanings, feelings, thoughts, experiences, and affects. These meanings are passages that may lead to further constructions of human creativity, to be further extended and built-up by future generations.” Humbled and wizened by the whole endeavor, Muyco closes the book in this lyrical and cinematic parting shot: “I sibod through the river of my thoughts as if departing from Barangay Nayawan or Tacayan, riding the balsa (raft) navigated by the Panay Bukidnon down the Pan-ay River toward a safer shore where I would head home.”

My introduction to Panay Bukidnon was through the research works and publications of UP anthropologist Dr. F. Landa Jocano (1930-2013), specifically, the epic Hinilawod: Adventures of Humadapnon in Tarangban Cave (Punlad Research House, Inc., 2000) and recently, the four books out of the 10-volume epics published by the University of the Philippines Press, the product of 25 years of research of another UP anthropologist Alicia P. Magos, with the last line of living master chanters Federico Caballero (a Gawad Manlilikha ng Bayan Awardee), Leopoldo Caballero, Romulo Caballero, and Teresita Caballero-Castor: Tikum Kadlum (Black Dog), Amburukay (Enchanted Hermit Woman), Derikaryong Pada (Gold Pendant), and Kalampay (Enchanted Crab).

The publication of this book extends and widens the existing literature and scholarship on the Panay Bukidnon. This is our vernacular excellence, affective tendencies, endurance, and innovation—what could be the universal in us. Indeed, a rich resource and significant contribution in anthropology, language and literature, performance studies, cultural studies. This reader thanks Dr. Muyco for this “passionate scholarship.” More than substance, this is a book about method, and what is equitable and ethical.

Your cosmo farm girl. View all posts by Pangga Gen