The sun shone the whole day of Saturday that January 04. It was a 2 ½-hour jeepney ride from our barangay in Dao to the town of Culasi in Antique. We traveled the coastal road, the Dream Team composed of Dr. Heath Motley of the United Nations Chiropractic Center-Manila (Ermita branch); eldest sister Faith and brother-in-law Mike; youngest sister Pearl Joy, head of the psychosocial support being the trained and experienced one as faculty and MS Psychology student at the Ateneo de Davao University; Jessie Frencillo, PJ’s right hand, a Manila-based ministry servant, who is also a godbrother in the neighboring barangay, and who brought with him godsister Grace, an I.T. graduate of the University of San Agustin, who invited with her Paul, a close relative, ka-barkada, also an experienced volunteer, and another ka-barangay Rene Sibulangcal, a young award-winning photographer in vacation from Manila. From another barangay, Pong Serdeña joined us, a professional photographer and experienced documenter of different relief operations in Antique and Iloilo initiated by private organizations. In San Jose, Aylyn Villojan completed the team. She is also from Dao and a schoolmate, now a successful Manila-based business analyst, who flew in the other day for this commitment – our reunion after a long time beyond Facebook.

We arrived at the poblacion, in the house of my high-school penpal Maida Magsipoc-Basañes, our host and coordinator. Since Yolanda, she had found herself full of donors entrusting her their help, from buying banca to sustaining her own initiative, a feeding program for her high school students at the Northern Antique Vocational School (NAVS). She had shared with us her sadness on their lack of motivation – and shame – after the typhoon destroyed their house and livelihood. Most of her students are from upland barangays and small neighboring islands: the trip to the town for school – a challenge and a feat.

Pearl Joy briefed the team on ‘Ang Kuwento ng Pagdadala,’ a framework in counseling and therapy developed by Dr. Edwin T. Decenteceo of UP. Tasks were given, we lunched, and off we rode to Barangay Janlagasi, almost 15 minutes away on the ricefields before Mt. Madya-as. We gathered on monoblock chairs, at the shadowed part of the barangay plaza by a roof-blown structure. Behind us, ravaged coconut trees. After a brief orientation and introduction of the team, we danced in the singing of “Maghirupay Kita” and broke into groups for the sharing session. The adults occupied the chapel and the plaza, where on the other side children gathered with paper and art materials to drew their thoughts and feelings. 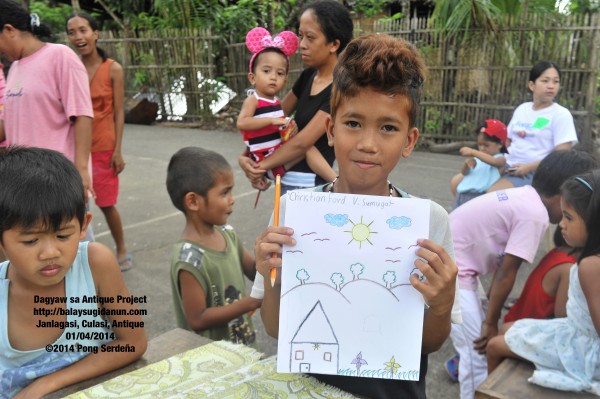 Inside the one-room barangay hall, a long-wooden table was provided for the chiropractor. I assisted as translator. It was insightful, how pain and grief could manifest physically. We endure because we lack access to health professionals and services, and so the chiropractor was welcomed with curiosity and fondness. Men and women of different ages lined up with their complaints of body pains from head to feet, which were also their life stories, and hopes. It was instructive, of how mother tongue is indeed effective; translation as context, attention to non-verbal clues and gestures, and compassion.

Past 4, when the different sharing groups were done, we served arrozcaldo, pancit, and bread. After, a tolda was spread out in the plaza. We brought out the sacks of clothes donated by The Manila Residences Tower in Taft Avenue where I am staying, transported with discount given by the bus conductor and driver of Dimple Star in Pasay terminal, and the libreng ukay-ukay started.

Brgy. Captain Mariet Barcenal, on megaphone, gave out instructions, and jokes. We watched nearby, pleased in the order of things on the floor, their fun in rummaging for their need and want as our mutual satisfaction. 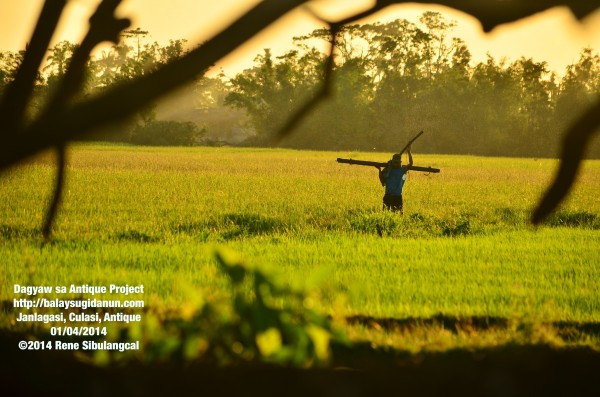 We rested with the sunset by the open fields in front of the house of the family of Zurick Sumugat, Maida’s childhood best friend who facilitated things for us in the barangay. The Dream Team exchanged observations and insights (I hope to share these with you in the coming weeks) before bottles of beer and husks of coconut juice. Not for long, the photo and videoke sessions, and we enjoyed the dinner of seafood and farm fresh produce. We glowed with the moon, in both exhaustion and satisfaction, energized by more ideas for the next day on the ride back to the town, the Janlagasi stories we carried with us.